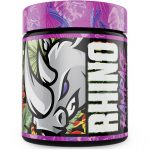 Arez Titanium is known for its four key ingredients; L-Citrulline, Beta Alanine, Agmamite Sulfate and Synephrine HCL. L-Citrulline serves as an endogenous (naturally occurring) precursor to Arginine, thereby enhancing nitric oxide synthesis through what is known as the arginine-nitric oxide pathway. Many believe L-Citrulline to be the strongest/most proven pump inducing ingredient of all time. Beta Alanine has become a rising-star due to studies claiming that it raises muscle carnosine levels, and increases the amount of work that can be performed at high intensities. It induces an addictive “tingle” when it kicks in, and will offer you the endurance to push through when you’d normally want to call it quits. Agmatine Sulfate is a powerful L-Arginine byproduct that has been shown to promote muscle pumps, transport nutrients, and increase blood flow! It may promote fast-twitch performance, and is also a potent anti-fatigue agent. Synephrine offers a myriad of benefits! These include: increased metabolic rates, increased caloric expenditure, increased energy levels, and a promotion of fat loss! It acts as a stimulant, similar to caffeine, except with stronger appetite suppressing properties, and a stronger rush of energy. Synephrine instantly levels-up the stimulant profile of ANY Pre-Workout that it can be found in.